You can feel it when this plane gets close to its destination. It dips, bumps and skips. The chatter on the radio turns from banter to business: barometric pressure, temperature, wind speed. 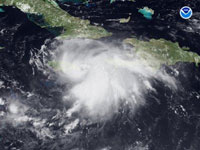 As one of only 10 specially equipped C-130 Hurricane Hunters, its mission is helping forecasters know where tropical storms and hurricanes will go and when.

On Wednesday, it was headed to 19 degrees north latitude, 74 degrees 18 minutes west longitude: the last known coordinates of the center of Tropical Storm Gustav, which was messily churning through the Caribbean.

The flight plan sounds straightforward: make a series of passes through Gustav's winds, try to locate its center and quickly get the information back to forecasters at the National Hurricane Center in Miami.

Even today, satellites don't get extremely accurate readings of what's going on at the core of storms, says National Hurricane Center Director Bill Read. The sooner the center gets firsthand information from the plane, the better forecasters can predict a storm's direction, size and intensity over hours and days. Air Force Reserve Hurricane Hunter flights operate around the clock when there's a storm.

Flying in this $72 million aircraft is completely different from a commercial airliner. For visitors, it starts with a preflight warning about sudden drops.

"There have been a few people who have hit the ceiling unexpectedly," says Lt. Col. Troy "Bear" Anderson, who headed Wednesday morning's flight of 13 people.

Passengers strap into red fabric benches along the sides of the utilitarian cargo hold, where the unfinished ceiling is crisscrossed with bundles of white wires and tubes wrapped in pale green fabric blankets.

The toilet is cordoned off by a green curtain. The motion-sickness bags assure those about to lose their lunches that "even veteran travelers are subject to occasional motion sickness."

On this trip, the Hurricane Hunters flew from Homestead Air Reserve Base south of Miami instead of their usual home at Keesler Air Force Base in Biloxi, Mississippi. From Homestead, it takes a little over two hours to reach Gustav. At first glimpse, the storm's center appears like a comma on the radar, a crescent of green and yellow. And the first pass is mild, even though a pint of milk someone has set on the cockpit counter sloshes around.

But there's more than the storm out there to worry about. With the plane flying at 5,000 feet (1,500 meters), navigator Maj. Sidney Smith wants to be sure they don't get too close to Jamaica, which has some 7,000-foot-high (2,100-meter-high) mountains.

That kind of rough terrain has weakened the storm from a Category 1 hurricane to a tropical storm, making its center less defined. But Gustav's headed for the warm water of the Gulf of Mexico, where it's expected regain strength from warm waters.

Whether that is happening yet is a question that's unanswered as the aircraft makes its second pass through the storm more than an hour later.

"We're going to chase this one a little bit," says Maj. Brian Schroeder, one of three weather officers onboard.

Schroeder, who is completing his training, guides pilot Capt. Dena Schulz into what he believes is the center of the storm.

Radar shows the plane in the path of some green blotches, indicating rain.

"You're going to nail it this time," says Lt. Col. Valerie Hendry, the weather officer training Schroeder. Another weather officer, Capt. Tobi Baker, watches the ocean from a window at the plane's rear.

When instruments tell Schroeder that the winds have shifted from battering one side of the plane to lashing at the other, Schroeder knows: We're at the center of the storm.

Schroeder asks that the plane position be marked, and the flight's loadmaster, Tech. Sgt. Troy Bickham, releases a package of instruments out of the plane. Called a dropsonde (pronounced drop-sawn), it's a cardboard tube about the length of a person's forearm and stuffed with sensors.

For a few minutes before it hits the water, the dropsonde will relay data back to the plane, including wind direction, wind speed, air temperature, relative humidity and barometric pressure.

"Sonde's away," Bickham says as it leaves the plane with a thump. "Good sonde," he says as the data begins appearing on a screen in front of him.

The wind speed and the barometric pressure haven't changed much, so the storm hasn't strengthened. Schroeder calls it "tropical trash," but that doesn't mean the danger has passed.

"It's almost like it's gathering up its belongings here," Schroeder says on one of the next passes through the storm, "like it's wanting to be a hurricane again."

It won't on their watch.

The plane touches back down with lightning flashing over Miami. On the way to their debriefing, the crew passes their replacements. They're already dressed in flight suits and headed out to the storm for the night shift, ready to see what Gustav will do next.