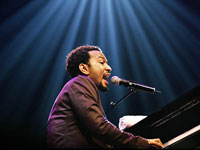 Legend claimed that Springfield had a lot of talents and that concert was a nice variety that represented the diversity of the town.

Proceeds from the concert, which was the brainchild of Legend's brother Vaughn Anthony Stephens, go to the Jason Collier Memorial Scholarship Fund. Collier, an NBA player and Springfield Catholic Central alum, was 28 when he died from a sudden heart rhythm disturbance in 2005.

Legend had met Collier in high school. The singer called his death tragic.

Legend was born in Springfield, Ohio. His career began at the age of 3, when his grandmother began teaching him to play gospel piano.

John Legend is an American R&B singer, songwriter, and pianist. His debut studio album, the platinum-selling Get Lifted, was released in late 2004, and features collaborations with rapper and producer Kanye West as well as Snoop Dogg. Get Lifted produced two singles: "Used to Love U" and "Ordinary People".

Legend has won five Grammy Awards. Prior to the release of his debut album, Legend's career gained momentum through a series of successful collaborations with multiple established artists. Notably, Legend sang the hooks for hits by Slum Village, Jay-Z, and Dilated Peoples.

He played piano on Lauryn Hill's "Everything is Everything"; and sang background vocals on Alicia Key's "You Don't Know My Name", Fort Minor's "High Road."