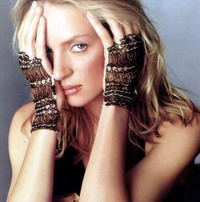 Jack Jordan, 35, has been held on $10,000 (6,825 EUR) bail since his arrest in October. A felony complaint said he had tried unsuccessfully on Nov. 8, 2005, to get into Thurman's trailer on a movie set in lower Manhattan's SoHo neighborhood.

Authorities say he also sent Thurman e-mails and letters, followed her and threatened to kill himself if he saw the actress with another man.

He was arraigned Friday on an attempted coercion charge in Manhattan's state Supreme Court. He could face up to four years in prison if convicted.

The day after his arrest, Jordan's family had him involuntarily committed to a psychiatric hospital. After his release, he sent numerous e-mails addressed to Thurman and other members of her family during August and September of 2006, the criminal complaint says.

Last August, it says, he appeared three or four times a week at Thurman's home, asking to see her and being told to leave.

Thurman has starred in "Pulp Fiction," "The Producers," and the "Kill Bill" movies.

Jordan was told to return to court Dec. 5 for a possible disposition of the case. Meanwhile, an order of protection directs him to stay away from the 37-year-old actress.

"If the complainant weren't Ms. Thurman," said defense lawyer George Vomvolakis, "this would have been a misdemeanor stalking case."

Assistant District Attorney Christopher Hill said Jordan had been "acting erratically for the past several years" and therefore was not a good bail risk.

Vomvolakis said Jordan is a 1994 graduate of the University of Chicago and is currently a graduate student at Mills College in Oakland. He denied that his client was homeless, saying he had family and a home in Massachusetts.