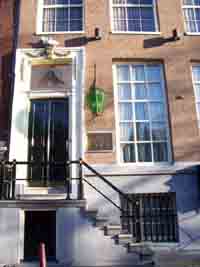 The Yab Yum club, located in a historic canalside mansion in downtown Amsterdam, has long been an exclusive hang out for well-heeled businessmen and tourists, but city fathers now believe its owners could be engaging in "criminal transactions" and have revoked its permit, Amsterdam Municipality spokesman Hendrik Wooldrik said Friday.

Amsterdam has been conducting a crackdown on criminality in the city center for nearly five years, using a 2002 law that forces business operators to disclose detailed accounting in order to have their licenses renewed.

A panel set up under the law concluded that there is a serious risk the club's owners will use it as a front for criminal activities. The owners were allowed to respond to the conclusion, but could not convince the city not to withdraw its license, the municipality said in a statement.

Wooldrik would not elaborate on what kind of criminal activities were suspected, but so-called private clubs and brothels have in the past been accused of laundering money for crime gangs involved in everything from drug dealing to extortion rackets.

The club's owners have been ordered to close it down within weeks, but can appeal the decision to pull its license, Wooldrik said.

Nobody answered the phone at Yab Yum on Friday.

Entry to the club costs EUR70 (US$100), according to its Web site, which shows pictures of an ornate bar and private rooms featuring double beds and huge bath tubs.

Prostitution is legal in the Netherlands, but Amsterdam Mayor Job Cohen says he wants to root out the "underlying criminality" linked to the city's famed Red Light District.

In September, the city announced that a public housing corporation had bought 18 buildings in the Red Light District to redevelop them - a deal that could lead up to the shuttering of one third of the windows where scantily clad prostitutes stand to attract customers.