Scientists have devised a way for brewery waste water to generate electricity - by using sugar-consuming bacteria. 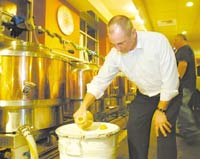 The experimental technology was unveiled Wednesday by scientists at Australia's University of Queensland, which was given a 140,000 Australian dollar (US$115,000; EURO 85,000) state government grant to install a microbial fuel cell at a Foster's Group brewery near Brisbane, the capital of Queensland state.

The fuel cell is essentially a battery in which bacteria consumes water-soluble brewing waste such as sugar, starch and alcohol.

The 2,500-liter (660-gallon) fuel cell will be 250 times bigger than a prototype that has been operating effectively at the university laboratory for three months, Keller said.

"Brewery waste water is a particularly good source because it is very biodegradable ... and is highly concentrated, which does help in improving the performance of the cell," Keller said.

He expected the brewery cell would produce 2 kilowatts of power - enough to power a household - and the technology would eventually be applied in other breweries and wineries owned by Foster's.

"It's not going to make an enormous amount of power - its primarily a waste water treatment that has the added benefit of creating electricity," Keller said.