Vatican archaeologists have unearthed a sarcophagus believed to contain the remains of the Apostle Paul that had been buried beneath Rome's second largest basilica. 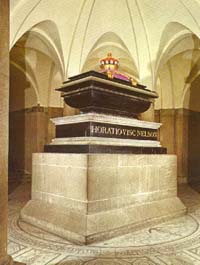 The sarcophagus, which dates back to at least 390 A.D., has been the subject of an extended excavation that began in 2002 and was completed last month, the project's head said this week.

"Our objective was to bring the remains of the tomb back to light for devotional reasons, so that it could be venerated and be visible," said Giorgio Filippi, the Vatican archaeologist who headed the project at St. Paul Outside the Walls basilica.

The interior of the sarcophagus has not yet been explored, but Filippi didn't rule out the possibility of doing so in the future.

Two ancient churches that once stood at the site of the current basilica were successively built over the spot where tradition said the saint had been buried. The second church, built by the Roman emperor Theodosius in the fourth century, left the tomb visible, first above ground and later in a crypt.

When a fire destroyed the church in 1823, the current basilica was built and the ancient crypt was filled with earth and covered by a new altar.

"We were always certain that the tomb had to be there beneath the papal altar," Filippi told The Associated Press in a telephone interview.

Filippi said that the decision to make the sarcophagus visible again was taken after many pilgrims who came to Rome during the Catholic Church's 2000 Jubilee year expressed disappointment at finding that the saint's tomb could not be visited or touched.

The findings of the project will be officially presented during a news conference at the Vatican on Monday.