Obese mice on a high-fat diet got the benefits of being thin living healthier, longer lives without the pain of dieting when they consumed huge doses of red wine extract, according to a landmark new study. 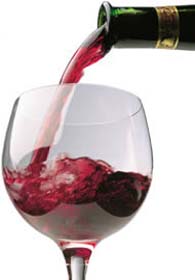 It is far too early to know if this would work in people, scientists said. But several, excited by the findings, called it promising and even "spectacular."

The study by the Harvard Medical School and the National Institute on Aging shows that heavy doses of the red wine ingredient, resveratrol, lowers the rate of diabetes, liver problems and other fat-related ill effects in obese mice.

Fat-related deaths dropped 31 percent for obese mice on the supplement, compared to fat mice that got no treatment. The mice that got the wine extract also lived longer than expected, the study showed.

And astoundingly, the organs of the treated fat mice looked normal when they shouldn't have, said study lead author Dr. David Sinclair of Harvard Medical School.

"They're chubby but inside they look great," Sinclair said Wednesday afternoon. "You have to pinch yourself to make sure that this is all real, but the study involved 27 different researchers, each of whom had a `Eureka!' moment."

Sinclair said other preliminary work still under way shows the wine ingredient has promise in extending the lives of normal-sized mice as well.

Sinclair has a financial stake in the research. He is co-founder of a pharmaceutical firm, Sirtris Pharmaceuticals Inc., which is testing to see if the extract can be used safely to treat people with diabetes.

For years, red wine has been linked to numerous health benefits. But the new study, published online in the journal Nature on Thursday, shows that mammals given ultrahigh doses of resveratrol can get the good effects of cutting calories without actually doing it, reports AP.

"If we're right about this, it would mean you could have the benefit of restricting calories without having to feel hungry," Sinclair said. "It's the Holy Grail of aging research."

Even though he called the work "tantalizing," Dr. Howard Eisenson, director of the Duke University Diet and Fitness Center urged people not to get too excited.

"All of us who practice medicine have learned that we can't leap from studies in the lab particularly in lab animals _ to what will happen in humans," Eisenson said.

Resveratrol, produced when plants are under stress, is found in the skin of grapes and in other plants, including peanuts and some berries.

The 55 resveratrol-treated obese mice were on a high-calorie diet what one scientist called a "McDonald's diet." Not only were they about as healthy as normal mice, they were also as agile and active on exercise equipment as their lean cousins, demonstrating a normal quality of life that was unexpected for such obese creatures, said study co-author Rafael de Cabo of the Institute on Aging.

"These fat old mice can perform as well on this skill test as young lean mice," Sinclair said.

The only major body measurement that did not improve, aside from weight, was cholesterol, and that seemed not to matter to the overall health of the mice, Sinclair said.

The study is so promising that the aging institute this week is strongly considering a repeat of the same experiment with rhesus monkeys, a closer match to humans, said institute director Dr. Richard Hodes.

Hodes cautioned that it is too early for people to start taking nonregulated resveratrol supplements because safety issues have not been adequately considered.

Sirtris Pharmaceuticals is working on a high-dose resveratrol pill that, unlike unregulated supplements on the market now, would be used as a drug and require Food and Drug Administration approval, said company chief executive officer Dr. Christoph Westphal. That development and federal approval is about five years away, he said.

Sirtris is aiming the research at diseases of aging, which include diabetes.

Sinclair's results are so promising that he rushed the study into the science journal while the obese mice still are alive, not waiting several more weeks or months until they die. That raises some misgivings, including specific figures about mortality, but is understandable, said outside experts. The obese mice still lived past the median age for mice of their weight.