Chronic fatigue syndrome appears to result from something in people's genetic makeup that reduces their ability to deal with physical and psychological stress, researchers reported Thursday. 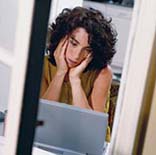 The research is being called some of the first credible scientific evidence that genetics, when combined with stress, can bring on chronic fatigue syndrome a condition so hard to diagnose and so poorly understood that some question whether it is even a real ailment.

Researchers said the findings could help lead to betters means of diagnosing and treating chronic fatigue syndrome and predicting those who are likely to develop the disorder, which is characterized by extreme, persistent exhaustion.

"The results are ground-breaking," said Dr. William Reeves of the Centers for Disease Control and Prevention.

Reeves said the study demonstrates that people with chronic fatigue syndrome are unable to deal with everyday challenges and adversity. That could include injuries, illnesses, divorce, even stressful jobs, the researchers said.

The CDC estimates more than 1 million Americans have the condition, with women suffering at four times the rate among men.

The research is contained in a collection of 14 articles published in this month's issue of Pharmacogenomics, a scientific journal.

The centerpiece is a study of 227 people with chronic fatigue syndrome in Wichita, Kansas. Over two days, doctors performed psychiatric evaluations, assessed their physical limitations, looked at their medications, and tested their blood and urine for chemical and biological abnormalities.

The data included 500 clinical measures and 20,000 measures of gene expression, which is the process by which genes regulate cell activity.

The information was then given to four teams of investigators, including medical experts, molecular biologists, mathematicians and engineers.

Among their findings: Chronic fatigue patients tested with high levels of allostatic load, which is a stress measure of hormone secretions, blood pressure and other signs of wear and tear on the body. The patients were about twice as likely to have a high allostatic load index as people who did not have chornic fatigue syndrome.

The researchers also found that certain genetic sequence variations in five stress-moderating genes showed up consistently in chronic fatigue patients. And they identified at least five subtypes of chronic fatigue syndrome, classified according to criteria that include their genetics and the way their symptoms unfold.

"Because we have this information, we're going to be able to predict who is more susceptible to certain types of stressful events," said Suzanne Vernon, molecular biology team leader for the CDC's CFS Research Laboratory in Atlanta.

Chronic fatigue syndrome is a complex illness characterized by at least six months of severe fatigue that is not helped by bed rest. Patients also report such symptoms as muscle pain and impaired memory.

The cause has never been identified, and there are no specific tests for it. It was first identified in the 1980s, but many people including some health professionals have greeted CFS patients with skepticism, regarding it as the complaint of "a bunch of hysterical upper-class white women," said Reeves, who heads the CDC's CFS research program.

The CDC research joins a cluster of studies published in the past eight months that implicate certain genes and gene expressions as a contributing factor to the condition, said Kim McCleary, president of the Charlotte, North Carolina-based Chronic Fatigue and Immune Dysfunction Syndrome Association of America.

The findings contribute to an evolving, complicated explanation of how genes, stress and other factors work together to cause and perpetuate the illness, she said, reports AP.