Raloxifene prevents breast cancer as well as old standby, with fewer side effects 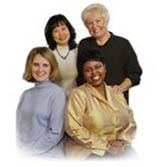 Raloxifene prevents breast cancer as well as old standby, with fewer side effects

The striking new results, from a government study of nearly 20,000 women, suggest that raloxifene may supplant its older cousin as the first choice for breast cancer prevention in postmenopausal women at high risk of developing the disease.

"Now women have a choice," Dr. Leslie Ford, NCI's cancer prevention chief, said in an interview Monday. "It's good news, because we're giving you a choice with fewer side effects."

Manufacturer Eli Lilly & Co., which sells raloxifene under the brand name Evista, plans to seek Food and Drug Administration approval for the new use.

Until now, tamoxifen has been the only drug approved to reduce the chances of breast cancer striking high-risk women. It is a multiple-use drug: It acts like the estrogen hormone in some tissues, like an anti-estrogen in others.

Estrogen can fuel certain breast cancers, making tamoxifen a longtime top choice both to prevent the disease's return in women with tumors sensitive to estrogen and to reduce the odds of it striking high-risk women in the first place.

But tamoxifen causes rare but serious side effects: It acts like an estrogen in the uterus and bloodstream, thus increasing a user's risk of getting uterine cancer or a life-threatening blood clot.

Raloxifene is a close chemical relative, in the same drug family known as "selective estrogen response modulators," and earlier research suggested that it might help breast cancer, too. So the NCI launched the $88 million (Ђ72.75 million) study to compare the two.

Raloxifene causes the same side effects, but not as many: Raloxifene users had 36 percent fewer uterine cancers and 29 percent fewer blood clots, the initial results show.

Some 2 million U.S. women every year are thought to be candidates for tamoxifen risk-reduction therapy, but many have avoided it for fear of the side effects, said Dr. Kathy Albain of Loyola University, a researcher in the new study, reports AP.