There's no lost-and-found bin on the space station where weightlessness can cause objects to float away. 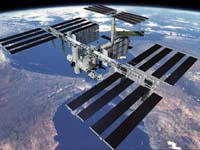 So when four canisters disappeared earlier this month, crew members Bill McArthur and Valery Tokarev went hunting for them on the 15,000-cubic-foot (425-cubic-meter) space station. Over the weekend, McArthur found them behind a panel in a module used for docking with Russian space vehicles.

McArthur and Tokarev "had a couple of ideas of where to look and this was one of them," NASA spokeswoman Kylie Clem said Monday.

Spacewalks in Russian spacesuits had been on hold since the lithium hydroxide canisters went missing, but the ban was lifted after their discovery. The canisters scrub carbon dioxide from the breathing air of spacewalkers.

Last week, NASA lifted a temporary restriction on spacewalks in U.S. suits because of a different problem.

McArthur and Tokarev have been working on the space station since Oct. 3. They are to be relieved by a crew that is scheduled to arrive at the station Friday night after launching from Kazakhstan, reports AP.