Twenty-five years after the first AIDS cases jolted the world, U.S. scientists think they soon may have a pill that could prevent HIV, the virus that causes the global killer. 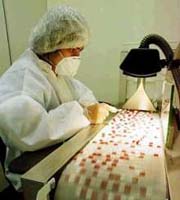 "This is the first thing I've seen at this point that I think really could have a prevention impact," said Thomas Folks, head of the HIV research lab at the U.S. Centers for Disease Control and Prevention. "If it works, it could be distributed quickly and could blunt the epidemic."

Two drugs already used to treat HIV infection have shown such promise at preventing it in monkeys that officials last week said they would expand early human tests around the world.

The drugs are tenofovir (Viread) and emtricitabine, or FTC (Emtriva), sold in combination as Truvada by Gilead Sciences Inc., a California company best known for inventing Tamiflu, a drug showing promise against bird flu.

If larger tests show the drugs to be as effective on humans, they could be given to people at highest risk of HIV.

Condoms and counseling alone have not been enough HIV spreads to 10 people every minute, 5 million every year. A vaccine remains the best hope but none is in sight.

Matthew Bell, a 32-year-old hotel manager in San Francisco who has volunteered for a safety study on one of the drugs, said he would welcome taking a drug as an added precaution to practicing safe sex.

"As much as I want to make the right choices all of the time, that's not the reality of it," he said of practicing safe sex. "If I thought there was a fallback parachute, a preventative, I would definitely want to add that."

Some fear that this could make things worse.

"I've had people make comments to me, 'Aren't you just making the world safer for unsafe sex?"' said Dr. Lynn Paxton, team leader for the project at the Centers for Disease Control and Prevention.

But some uninfected gay men already are getting the drugs from friends with AIDS or doctors willing to prescribe them to patients who admit not using condoms. This kind of use could lead to drug resistance in infected and uninfected alike, and is one reason officials are rushing to expand studies.

"We need information about whether this approach is safe and effective" before recommending it, said Dr. Susan Buchbinder, who leads one study in San Francisco.

Unlike vaccines, which work to boost the immune system the very thing HIV destroys AIDS drugs simply keep the virus from reproducing. They already are used to prevent infection in health care workers accidentally exposed to HIV, and in babies whose pregnant mothers receive them.

Taking them daily or weekly before exposure to the virus the time frame is not known yet may keep it from taking hold, just as taking malaria drugs in advance can prevent that disease when someone is bitten by an infected mosquito, scientists believe, reports AP.