Sun's next 11-year cycle will be stronger

The next 11-year sunspot cycle will be late but strong according to a new computer prediction. The model used was virtually spot on when applied retrospectively to "forecast" the last eight solar cycles. 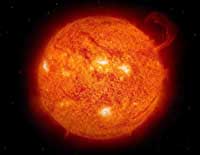 Sun's next 11-year cycle will be stronger

"We predict the next cycle will be 30% to 50% stronger than the last cycle," says the model's creator, Mausumi Dikpati, of the National Center for Atmospheric Research's High Altitude Observatory in Boulder, Colorado, US.

The Sun is currently near its minimum activity, at the tail end of a solar cycle, numbered 23. "Onset of the next cycle will be delayed by six to 12 months, to late 2007 or early 2008," Dikpati says. She expects the next peak to hit in 2012, reports New Scientist Space.

According to San Francisco Chronicle, astronomers will monitor the sun daily in the coming months to see how it's doing. Early warning signs will be the formation of large groups of sunspots, which are clusters of solar magnetic fields that are cooler than the rest of the sun.

"I look (at telescopic images of the sun) almost every day, thinking, 'It could be today,' " said David Hathaway, solar physics team leader at NASA's Marshall Space Flight Center in Alabama. He compared it to "waiting for the first sparrow of spring."

Solar storms can happen at any time during an 11-year solar cycle. However, by far the worst storms are likeliest to occur during the period known as "solar maximum," or solar max for short. The last solar max was in 2001.

The scientists are confident of their forecast for 2012 because they've successfully used a new computer model to "forecast" the past. That is, they used records of old solar cycles to figure out how the sun should have behaved during eight past cycles, as far back as the early 20th century. They "forecast" the sun's past behavior -- "hindcasting," they call it -- "with more than 98 percent accuracy" the scientists said.

"I'm really excited about this (discovery)," said NASA's Hathaway. "It's based on sound physical principles, and it finally answers the 150-year-old question: What causes the sunspot cycle?"

The cycle's victims could include space satellites. The coming storms could heat the upper levels of Earth's atmosphere, causing it to expand and exert drag on low-flying satellites -- perhaps enough drag to tug some of them back to Earth. Solar storms have been blamed for the U.S. Skylab space station's premature fall back to Earth in 1979.