Leave it to the Dutch to help demonstrate the health benefits of chocolate. A study of older men in The Netherlands, known for its luscious chocolate, indicated those who ate the equivalent of one-third of a chocolate bar every day had lower blood pressure and a reduced risk of death. 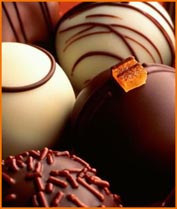 The researchers say, however, it's too early to conclude it was chocolate that led to better health. The men who ate more cocoa products could have shared other qualities that made them healthier. Experts also point out that eating too much chocolate can make you fat -- a risk for both heart disease and high blood pressure.

"It's way too early to make recommendations about whether people should eat more cocoa or chocolate," said Brian Buijsse, a nutritional epidemiologist at Wageningen University in The Netherlands, who co-authored the study, reports News Day.

According to New Scientist, regular consumption of cocoa may halve risk of dying and lower blood pressure, suggests a Dutch study in elderly men. But it is not necessarily good news for chocoholics, experts caution.

At five year intervals over a 15-year period, 470 men aged over 65 were questioned about their dietary intake of cocoa and received physical examinations. The men were placed in three groups according to their level of cocoa consumption and data about their health was collected. During the study, 314 men died, 152 due to cardiovascular disease.

“The men in the group that consumed the least cocoa were twice as likely to die from a heart attack than those in the group that consumed the most cocoa – at least 4g per day – and the risk remained lower even when other factors such as smoking, physical exercise and weight were taken into account,” says lead researcher Brian Buijsse, at the Dutch National Institute for Public Health and the Environment.

"And men in the study who consumed the most cocoa were less likely to die of any cause," he adds.