Very little is known about the first new tomb uncovered in Egypt's Valley of the Kings since Tutankhamun's in 1922. But no matter what's there, the discovery has broken the long-held belief that there's nothing left to dig up in the desert necropolis where some of the greatest pharoahs were buried. 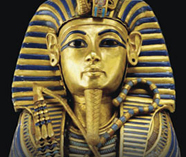 Egypt's antiquities authority has said only that the single-chamber tomb contains five wooden sarcophagi, in human shapes with colored funerary masques, surrounded by 20 jars with their pharoanic seals intact and that the sarcophagi contain mummies, likely from the 18th Dynasty, some 3,500-3,300 years ago.

Any details beyond that will have to wait until Friday, when antiquities chief Zahi Hawass visits to unveil the tomb.

Officials were keeping tight-lipped Thursday, a day after announcing the find. Calls to Hawass and other officials were not answered. American archeologist Otto Schaden, who headed the University of Memphis team that uncovered the site, declined to answer any questions when contacted by The Associated Press.

Photos released by the Supreme Council of Antiquities showed the interior of the tomb the bare stone walls undecorated with at least five sarcophagi of blackened wood amid white jars, some apparently broken. What appeared to be a sixth sarcophagus was set on top of two of the other coffins, though the council's statement mentioned only five.

The tomb's spare appearance suggests it was not dug for a pharaoh, said U.S. archaeologist Kent Weeks, who was not involved in the find but has seen photos of the site. "It could be the tomb of a king's wife or son, or of a priest or court official," he told The Associated Press on Thursday.

The tomb may provide less drama than the famed opening of King Tut's tomb in 1922 by American archaeologist Howard Carter, which revealed a treasure trove of gold artifacts along with the boy-king's mummy.

But it raises hopes that more is to be found in the Valley of the Kings, which for 83 years experts believed held only the 62 previously-known tombs, labelled KV61-62 by archeologists.

"I wouldn't be surprised if we discover more tombs in the next 10 years. For a long time, people thought there was nothing left to find and excavations seemed unlikely to produce much. So instead, they concentrated on recording what was already there," Weeks said.

Weeks made the last major discovery in the valley. In 1995, he opened a previously known tomb KV5 and found it was far larger than expected: more han 120 chambers, which he determined were meant for sons of the pharoah Ramses II.

"It's ironic. A century ago, people said the Valley of the Kings is exhausted, there's nothing left," he said. "Suddenly Carter found Tutankhamun. So then they said, Now there's nothing to find. Then we found KV5. Now we have KV63."

The 18th Dynasty, which lasted from around 1500 BC to 1300 BC, was the first dynasty of the New Kingdom, the pharaonic empire than lasted until around 1000 BC and made its capital in Thebes the present day city of Luxor, 500 kilometers (300 miles) south of Cairo. Tutankhamun is believed to be the 12 ruler of the 18th Dynasty.

The Valley of the Kings was used as a burial ground throughout the New Kingdom, though contrary to its name not all the tombs are of kings.

Schaden's team uncovered shafts leading to the tomb about five meters (yards) from Tut's tomb while conducting "routine digs," the antiquities council said in a statement Wednesday. The haphazard placement of the jars and coffins suggested burial was completed quickly, it said.

The fact that the tomb is a single chamber likely means it was meant for only one mummy, Weeks said.

More likely is that the already existing tomb was used as a storeroom for sarcophagi moved from other tombs later either by priests to protect them from theives, or by thieves to stash before removing them completely. The jars, he said, appear to be meat jars for food offerings.

Archeologists will have to determine not only the date of the tomb's creation but also the dates of the individual sarcophagi and mummies to find which if any of them are the tomb's owner.

The tomb's architecture will give hints on when it was dug. Early New Kingdom tombs have doors of different width and height than later ones, Weeks said. Inscriptions on the sarcophagi if present and the wrappings and other materials used in the mummies help determine their age.