Two teams of Chinese researchers working separately have reprogrammed mature skin cells of mice to an embryonic-like state and used the resulting cells to create live mouse offspring. The reprogramming may bring scientists one step closer to creating medically useful stem-cell lines for treating human disease without having to resort to controversial laboratory techniques. However, the advance poses fresh ethical challenges because the results could make it easier to create human clones and babies with specific genetic traits , Wall Street Journal reports. 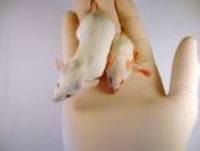 Meanwhile, in papers published online Thursday by two scientific journals, separate teams of researchers from Beijing and Shanghai reported that they had for the first time created virtual genetic duplicates of mice using skin cells from adult animals that had been coaxed into the equivalent of embryonic stem cells , Washington Post reports.

"We are confident that tremendous good can come from demonstrating the versatility of reprogrammed cells in mice, and this research will be used to ... understand the root causes of disease and lead to viable treatments and cures of human afflictions," said Fanyi Zeng of the Shanghai Institute of Medical Genetics at Shanghai Jiao Tong University.
"It would not be ethical to attempt to use iPS cells in human reproduction. It is important for science to have ethical boundaries," she said, adding that their study was "in no way meant as a first step in that direction" , Reuters reports.