Sickle-cell anemia (SS) is unfortunately one of the serious and most awful diseases in the world. And the most disgusting a sufferer comes across is pain, pain in several places at the same time. 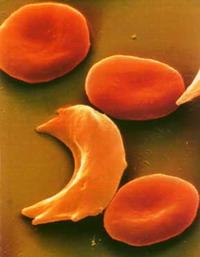 It’s a group of genetic disorders caused by sickle hemoglobin (Hgb S or Hb S). In many forms of the disease, the red blood cells change shape upon deoxygenation because of polymerization of the abnormal sickle hemoglobin; the hemoglobin proteins stick to each other, causing the cell to get a rigid surface and sickle shape. This process damages the red blood cell membrane, and can cause the cells to become stuck in blood vessels. This deprives the downstream tissues of oxygen and causes ischemia and infarction, which may cause organ damage, such as stroke.

The disease is chronic and lifelong. Individuals are most often well, but their lives are punctuated by periodic painful attacks. Life-expectancy is shortened, but contemporary survival data is lacking. Older studies indicated that sufferers could live to an average of 40 to 50 years, with the average age for males being 42 and the average age for females being 48. Sickle-cell disease occurs more commonly in people (or their descendants) from parts of the world such as sub-Saharan Africa, where malaria is or was common, but it also occurs in people of other ethnicities. This is because those with one or two alleles of the sickle cell disease are resistant to malaria since the red blood cells are not conducive to the parasites - in areas where malaria is common there is a survival value in carrying the sickle cell genes. The mutated allele has incomplete dominance, which means that an individual who carries the sickle cell genes but does not have the disease still retains immunity to malaria.

Patients with sickle-cell anemia can have symptoms that vary in severity.

The most terrible is a vaso-occlusive crisis (otherwise known as painful crisis) caused by sickle-shaped red blood cells that obstruct capillaries and restrict blood flow to an organ, resulting in ischemia, pain, and organ damage. The frequency, severity, and duration of these crises vary tremendously.

Because of its narrow vessels and function in clearing defective red blood cells, the spleen is frequently affected. It is usually infarcted before the end of childhood in individuals suffering from sickle-cell anemia.

Bones, especially weight-bearing bones, are also a common target of vaso-occlusive damage. This is due to bone ischemia.

Various approaches are being sought for preventing sickling episodes as well as for the complications of sickle-cell disease. Other ways to modify Hb switching are being investigated, including the use of phytochemicals such as Nicosan.

Gene therapy is under investigation.