Russian Foreign Minister Sergey Lavrov told his Iranian counterpart Saturday that Tehran must halt its uranium enrichment activity and work with the U.N. nuclear watchdog to answer questions about its nuclear program, the ministry said. 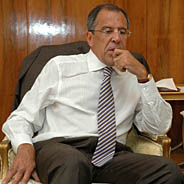 In a telephone conversation with Manouchehr Mottaki, Lavrov "again emphasized the urgent necessity for Iran to take concrete steps aimed at restoring trust on the part of the international community about its nuclear activity, including the suspension of R&D (research and development) work on uranium enrichment," a Russian Foreign Ministry statement said.

He also demanded that Iran "provide full-format cooperation" with the International Atomic Energy Agency to "clear up the IAEA's remaining questions" about its nuclear program, it said, reports AP.

Mohammad Saeedi, deputy head of Iran's Atomic Energy Organisation, told state television that Iran wanted the Security Council, which has the power to impose sanctions, to pass the case back down to the IAEA.

"If the case returns to the agency (IAEA) again, we will begin the section that concerns the Additional Protocol," Saeedi said.

"The enrichment will continue. But ... we will continue implementing the Additional Protocol as a voluntary measure," Saeedi added.

"If they change their decision and choose the wise path, and the case returns to the IAEA, we believe we can solve all the issues mentioned in ElBaradei's eight-page report very quickly."

Iran insists that it is merely using its sovereign right to enrich uranium at a low level to use as fuel in power stations -- and not aiming for the highly enriched form that could power a warhead, informs Reuters.

According to Boston Globe,t he report by the International Atomic Energy Agency, issued in Vienna, ended a 30-day grace period for Iran to show it was halting nuclear activities. It ushered in a critical new phase of diplomacy that could end in sanctions against the Iranian regime -- as the United States wants -- or in the failure to broker an international agreement on punishing Iran.

President Bush told reporters at the White House yesterday that the report ''should remind the Iranians that the world is united" against their attempts to acquire the technology for making nuclear weapons.