Russia continued to stress its differences with the United States over the Iranian nuclear crisis Friday, with the Foreign Ministry saying it was too early to speak of sanctions and a Russian Security Council representative saying there was no reason for Moscow to stop military cooperation with Tehran . "One can speak of sanctions only after the appearance of concrete facts proving that Iran is not engaged exclusively in peaceful nuclear activities," the ITAR-Tass news agency quoted Foreign Ministry spokesman Mikhail Kamynin as saying. 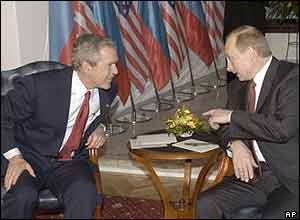 He also said that "force and sanctions alone cannot remove the world community's concern over Iran 's nuclear program," ITAR-Tass reported. Nikolai Spassky, deputy head of the Kremlin Security Council, put it even more bluntly. "There is no such issue (of sanctions) for us," he was quoted as saying by the RIA-Novosti news agency. "We are not discussing it."

Russian officials had said previously that they were awaiting an April 28 report by the head of the U.N. nuclear watchdog, Mohamed ElBaradei, before deciding Moscow 's position on further steps to resolve the Iran crisis. The United States and Britain say that if Iran does not comply with the U.N. Security Council's April 28 deadline to stop enrichment, they will seek a resolution that would make the demand compulsory.

"The adoption of a commitment on ending cooperation with this or that state in some sphere lies exclusively in the competence of the U.N. Security Council," he said in a statement. "Up to now, the Security Council has taken no decision on ending cooperation with Iran in nuclear energy." Every country "has the right to decide with whom and how it should cooperate," Kamynin said, adding that the Bushehr project was "under the full control" of the U.N. nuclear watchdog the Vienna , Austria-based International Atomic Energy Agency.

U.S. Undersecretary of State Nicholas Burns told reporters Wednesday in Moscow that the U.S. had called on countries to end all nuclear cooperation with Iran , including work on the Bushehr plant. He also said that countries should stop all arms exports to Iran Russia is supplying Iran with sophisticated air defense missiles. Burns said such action would send a message to Tehran that its behavior meant it would no longer be "business as usual."

Spassky said Friday that "there are no circumstances that would obstruct fulfillment of our obligations in military-technical cooperation with Iran ," ITAR-Tass reported. "Military-technical cooperation" is a euphemism for arms shipments. "This goes for all the obligations we have made, including the commitment to provide Iran with Tor-M1 air-defense systems," Spassky was quoted as saying.

Russia 's Defense Ministry has said Moscow would supply 29 sophisticated Tor-M1 air defense missile systems to Iran under a contract worth about US$700 million ( Ђ 600 million), according to Russian media reports. The United States , which believes Iran is intending to make nuclear weapons, has been pushing for tough measures because of Iran 's refusal to suspend its uranium enrichment program.

But Russia and China , both permanent members of the U.N. Security Council, continue to show resistance. China , too, renewed calls for a negotiated settlement Thursday. "We hope relevant parties will exercise restraint and show flexibility to properly handle the Iranian nuclear issue, to create conditions for the solution of the issue through negotiations," Chinese Foreign Ministry spokesman Qin Gang said at a regular briefing in Beijing. Iran has consistently resisted calls to abandon its enrichment program, reports the AP.