The United States said Wednesday it is close to reaching a trade agreement with Russia that would enable Moscow to clear another hurdle in its 12-year bid to join the World Trade Organization. 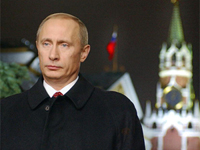 In Moscow, Putin told a meeting of Russian business executives that the United States had presented Russia a list of requirements "demanding additional agreements that we consider to have been put behind us long ago."

He said Russia wants to join the WTO, but conditions must be satisfactory for the Russian economy.

Under WTO rules, each member has the right to seek its own trade deal with a candidate before approving the candidate's membership. The bilateral deals eventually are consolidated so that all members trade with the new member under the same conditions. A U.S.-Russian pact is under negotiation.

He said the United States will continue to work in good faith with the Russians to move the process to a successful conclusion.

Portman said remaining issues to be resolved "are not new problems, and they are not dissimilar to those issues addressed by others who have acceded to the WTO."

He said the United States is working hard with Russia and other U.S. trading partners on both the bilateral and multilateral phases of the negotiation.

"Russia must live up to the rules and obligations which all WTO members accept," whether it is customs regulation or greater protection for intellectual property rights, Portman said.

Russia has been negotiating to join the 149-member global commerce body since 1994. It has had to embark on a major set of legislative changes to fall in line with WTO rules, including production of a new customs code, reports AP.