Russian President Vladimir Putin signed a decree declaring mourning on Wednesday, March 28, in Russia nationwide in connection with the massive fire at the shopping mall in the Siberian city of Kemerovo, the Kremlin press service reported. 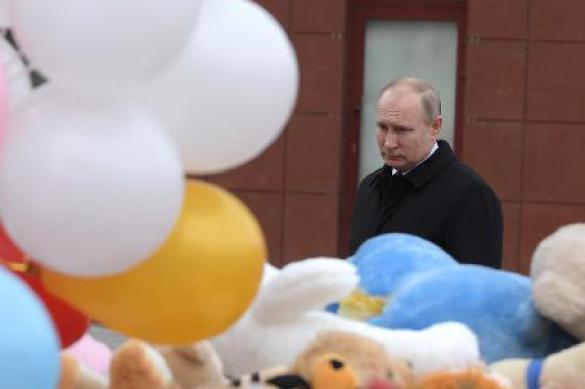 Putin left Kemerovo today in the morning, where he paid tribute to the victims of the fire and held meetings with local residents and officials.

"We're talking about demography, but we are losing so many people because of what? Because of criminal negligence, because of sloppiness," Putin said. Many Russian bloggers, though, were outraged by Putin's choice of words.

Putin did not appear at the rally on Kemerovo's central square, where hundreds of people, up to 4,000, gathered demanding the truth from the authorities.

The fire at "Winter Cherry" shopping center in Kemerovo occurred on March 25, The fire sparked on the upper, fourth floor of the center, where cinema halls and children's play areas were located.  According to most recent reports, 64 people became victims of the fire. Forty-one of them are believed to be children, who found themselves trapped in a cinema hall. The children could not get out as the doors of the hall were locked. However, the actual number of victims is likely to be a lot larger. Local residents believe that the authorities conceal the real death toll not to sow panic.