The fire at the shopping mall in the city of Kemerovo has killed 64 people, of whom 41 are children. The relatives of the victims confirm the information; the list of victims were plastered in their own headquarters. 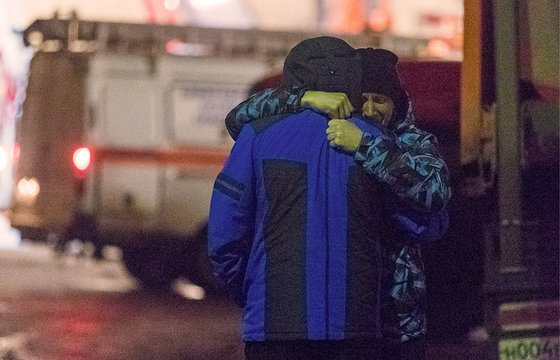 The official list of victims indeed includes 64 people. However, according to unofficial sources, the actual death toll of the massive fire in the shopping center can be a lot larger - up to 400. Some are led to believe that the authorities conceal the real information about the exact number of victims not to sow panic among the population. It was also said that several grieving parents attempted to commit suicide being unable to experience the loss of their children.

Kemerovo residents gathered for a rally on the central square of the Siberian city demanding a transparent investigation into the tragedy that occurred at "Winter Cherry" shopping center. The people demand the guilty should be brought to justice whereas the governor of the region and officials of the city administration should be dismissed.

The people demand the authorities should reveal the exact number of victims, investigate the tragedy as transparently as possible, punish the guilty and dismiss Governor Aman Tuleyev and other local officials.

The participants of the rally make their own lists of victims of the monstrous fire at the shopping center. Their lists already count over 80 names. In addition, the protesters claim that hundreds of new graves have been prepared at the city cemetery.

President Vladimir Putin also arrived in Kemerovo, where he laid flowers to the spontaneous memorial near the burnt shopping mall. Putin also talked to several people who were hospitalised as a result of the fire and held a special meeting with officials of the regional administration. Putin was outraged about the fact that the mayor of Kemerovo did not attend the meeting.

Putin also had an unscheduled meeting with a group of people, who arrived at a morgue to compare the number of victims with the official information provided from the authorities. The president assured the people that all the guilty of the terrible tragedy would be punished. "There's a group of 100 investigators working here now with the head of the Investigative Committee being responsible. Do not even doubt - all the guilty will be punished," Putin said.

The president also said that there was no point in casing doubts on the official data about the number of victims. Putin advised local residents not to trust pieces of unconfirmed information in social networks.