Putin to Sobchak: We will never let them turn Russia into another Ukraine

Presidential candidate Ksenia Sobchak, who was accredited for the press conference by Vladimir Putin from Dozhd (Rain) television channel, asked Putin about competition at the coming election. Before her questions, she said that she regretted the fact that she could communicate with President Putin within the scope of his traditional press conference, rather than a televised debate, in which Putin refuses to participate. 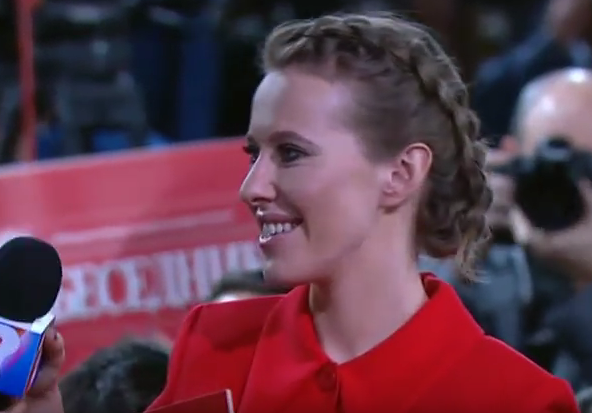 "These days, opposition candidates are either not allowed to elections, or the authorities create problems for them," Sobchak stated.

"Fictitious criminal cases were created against Aleksey Navalny, and those cases were recognised by the European Court of Human Rights (ECHR), and the Russian Federation recognises its decisions," Ksenia Sobchak said. Yet, she continued, it is impossible for Navalny to rent a venue, where he could communicate with his electors. "Are the authorities afraid of fair competition? Sobchak asked Putin.

President Putin asked a counter question to her: "Do you want another Maidan here? Do you want the whole country to live from one Maidan to another?"

"Opposition is supposed to come out with a clear, understandable program of affirmative actions. So say that you are against all. So what do you propose?" Putin asked as people in the audience started applauding him. He continued with saying that if opposition activists with no programs come to power, Russia will be thrown into chaos and "Maidan riots" and "Saakashvilis will be running about our squares and streets. "Do you want that to happen? I am convinced that the overwhelming majority of Russians do not want and will not let that happen," Putin strongly concluded.

On December 14, President Putin holds his annual Q&A session with Russian and foreign journalists. This conference is considered to be the beginning of his presidential campaign after Putin announced his decision to run for president again.