A 16-ton amphibian armored personnel carrier BTR-87 was shown to guests at Army-2017 Forum that opened in Patriot Park near Moscow. This is a 8x8 wheel formula vehicle, developed by GAZ Group's Military Industrial Company LLC. 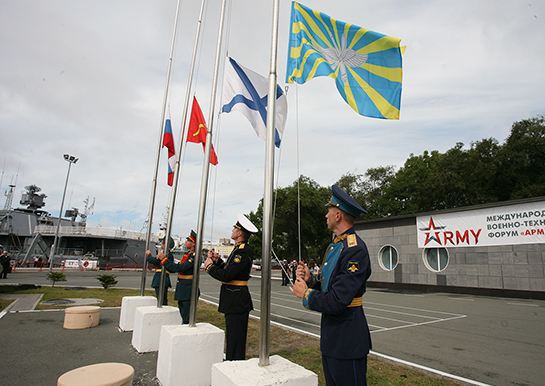 The new development is a profoundly modernized analogue of the BTR-82A with the front location of the engine and transmission compartment, which is different from the entire BTR-80/BTR-82 family.

The new vehicle operates on a 312 hp engine, which makes it possible to accelerate the vehicle up to 90 km/h on land and up to 10 km/h on water. The crew of the vehicle may consist of two people, but it is possible to place eight more servicemen on board. The designers envisaged a possibility to equip the BTR with various combat modules, depending on objectives. A standard version includes a combat module with a 30-mm automatic cannon 2A72 and a 7.62-mm PKTM machine gun.

The forum also held a presentation of an electromagnetic "gun" to counter drones. The innovation, called "Stupor", was developed at the main research and testing center of robotics of the Ministry of Defense of the Russian Federation. The "guns" suppress the activities of unmanned aerial vehicles, including copter drones, used on the terrestrial and water surfaces. The system, the range of which reaches 2 kilometers, emits electromagnetic pulses and "jams" the control channel of the drones.