The head of the Ministry of Foreign Affairs of Russia Sergey Lavrov and the State Secretary of the Vatican, Cardinal Pietro Parolin, discussed the position of Christians in the Middle East, as well as the state of affairs in Syria and Ukraine. This is the first time in the history of relations between Russia and the Vatican, when the Secretary of the Holy See arrived in Moscow for an official visit. 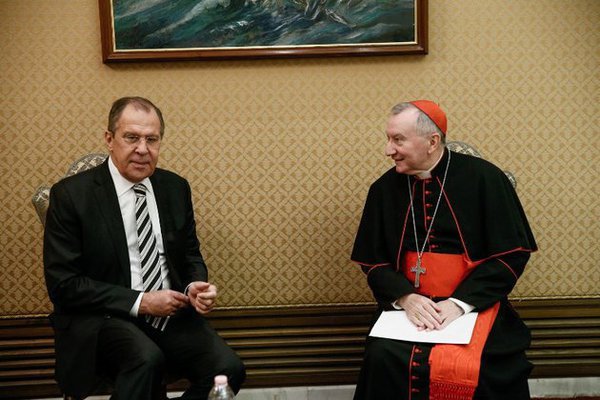 According to Mr Parolin, the relations between Russia and the Vatican remain on a very high and positive level. "I would like to emphasize here that our bilateral relations are at a very high and positive level," said Parolin, expressing a hope that the talks with the head of the Russian Ministry for Foreign Affairs will allow the parties to "compare notes" and strengthen bilateral ties.

Pietro Parolin also called on Russia and the West to unite their efforts in the struggle against terrorism.

Earlier, the Secretary of State of the Vatican talked to Metropolitan Illarion of Volokolamsk. The clerics discussed a possibility to bring relics of St. Nicholas the Wonderworker to Russia.

Pietro Parolin also said that he was going to have a meeting with President Putin on August 23. The Kremlin confirmed the information. The meeting will take place in the city of Sochi and will be dedicated to discussing key issues of relations between Russia and the Vatican, including in political and cultural-humanitarian spheres.