"Night Wolves" biker club leader Alexander Zaldostanov aka Surgeon asked Russian President Vladimir Putin to change the Russian coat of arms. The biker suggested adding the coat of arms with the Star of the Victory and "Soviet" wreaths. 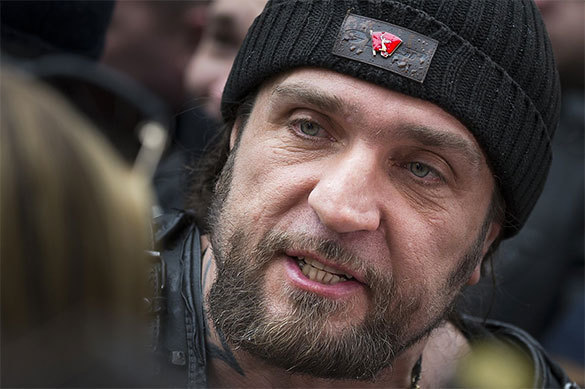 Zaldostanov considers it necessary to declare Russia's succession and outline the patriotic course of the country with the help of state heraldic symbols. The biker is certain that the political will of the president would be enough to make his suggestions become reality.

According to the biker's project, the amended coat of arms depicts the two-headed eagle against the background of sun rays, framed by wheat wreaths. The five-pointed Star of the Victory is on top of the national emblem. As for color choices, the two-headed eagle, the sun and the wreaths are golden, the star is red.

According to the biker, the Night Wolves have already prepared the sketches, as well as supporting documents. According to the authors of the project, the union of tsarist and Soviet symbols in the Russian coat of arms appears to be a symbolic reinterpretation "of the Crimean consensus."

"The Russian National Emblem is a symbol of the state, a sacred symbol of our past and future victories in the first place. We need to consolidate the succession of our state. The present-day coat of arms - the two-headed eagle - indicates succession from the Russian Empire, but we must also show that we cherish the legacy of the USSR, such as Gagarin's first space flight, the first sputnik, the mighty Soviet army and, of course, the titanic and holy victory in the Great Patriotic War," said Zaldostanov.

According to the biker, "new times require new symbols." "When the present-day coat of arms was approved, everything Soviet was obstructed. After Vladimir Vladimirovich Putin returned the gem of Russia - the Crimea - he returned the feeling of pride to the people of Russia. We realized that we are a great nation, it was our people, who defeated Hitler's army in Europe. May liberals, CIA hirelings and the like call it a return to the Soviet Union - they can call it to their liking. We are brining our Motherland back," said Alexander Zaldostanov.

It is worthy of note that chairman of Communists of Russia party, Maxim Suraykin, supported  Zaldostanov's initiative to supplement Russia's coat of arms with the Victory Star. According to the politician, the return of Soviet symbols on Russian state symbols will demonstrate Russia's course towards patriotism and rejection of the legacy of the 1990s.