Having completed the talks with the head of the Russian Foreign Ministry Sergei Lavrov, US Secretary of State John Kerry took a walk on Old Arbat Street in Moscow. 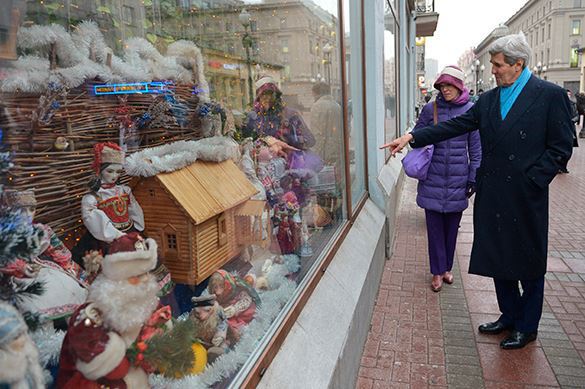 The head of the US State Department paid a visit to one of the shops in the street to buy traditional Russian souvenirs for his friends and family.

The sudden visit of the head of the US State Department and his delegation to a gift shop on Arbat became quite a surprise to its sales assistants.

Employees of the souvenir shop that Kerry visited told RIA Novosti that the US official purchased a large nesting doll (matryoshka) styled as a babushka. The US official also bought three dolls in national costumes and two amber rings with large stones.

According to the personnel of the gift shop, the authoritative American politician and members of his delegation visited the store without warning its owners.

"He was looking at the goods for a while and picked the matryoshka styled as a babushka. The most valuable things that he bought were two amber rings: one of them is in the shape of a flower and the other one - with a round stone. Each costs about 10,000 rubles," said the seller.

Kerry spent about ten minutes in the store; his assistant paid for him at the cash desk.

After that, John Kerry stopped by the Ukrainian Cultural Center not far from the shop to give an attentive look to the national flag of Ukraine on the building.