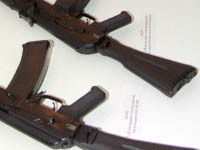 The new model of the legendary Kalashnikov assault rifle, AK-12, is scheduled to start in June 2013, officials with Izhmash company said, which develops the rifle.

"In the interests of the Defense Ministry of Russia, Izhmash works on the modernization of regular rifles of AK-74 and AK-100 series, and develops an all-arms assault rifle on the platform of the AK-12, the state tests of which are scheduled for June 2013," the company's general designer Vladimir Zlobin said.

In addition, for the new rifle, the company develops new caliber ammunition. In September 2013, Izhmash will finish work on the creation of three new cartridges. Their production will be established at cartridge factories that are a part of Kalashnikov concern.

According to Zlobin, Izhmash designers also develop AK-12SN for the Russian Interior Ministry. The new model is peculiar for its modular design. The test of the new model will begin next year.