People in the small Tennessee town want to find out why a quiet, unassuming preacher's wife might have killed her husband. 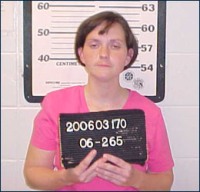 On Monday, the process that could produce answers begins with the opening of jury selection for the first-degree murder trial of Mary Winkler.

Her husband, Matthew Winkler, the popular 31-year-old minister at the Fourth Street Church of Christ in Selmer, was found dead on March 22, 2006, in the bedroom of the church parsonage by members of his congregation. Authorities said he had been struck by a single blast from a 12-gauge shotgun as he lay in bed.

His wife was arrested a day later in Orange Beach, Alabama, some 340 miles (550 kilometers) away, with her three young daughters.

Police say she admitted shooting her husband, and they said it had something to do with his constant criticism.

"It was just building up to this point," Mary Winkler said, according to a statement taken by Alabama police. "I was just tired of it. I guess I just got to a point and snapped."

But friends have said they cannot understand how someone as sweet and quiet as Mary Winkler could be charged with murder.

The Winklers were married in 1996. They met at Freed-Hardeman University, a Church of Christ-affiliated school in Henderson, Tennessee where Matthew's father was an adjunct professor. Mary took education classes, and Matthew took Bible classes. Neither graduated.

Before moving to Selmer, Matthew Winkler taught Bible classes part-time at a Church of Christ-affiliated school.

"This was a perfect family," Judy Turner, a member of the Winkler's McMinnville church, said just after Winkler was arrested.

Her lawyers have said the Winklers were victimized by a swindle known as an advance-fee fraud, or the "Nigerian scam," in which victims are told that a sweepstakes prize or some other riches are waiting for them if they send in money to cover processing expenses.

No one has said how much money the Winklers might have lost, or what role if any the financial strain might have played in the shooting.

Mary Winkler's father, Clark Freeman, has said his daughter might have been physically abused.

If convicted as charged, Winkler would be sentenced to life in prison with parole possible after 51 years.

While she has been found competent to stand trial, her attorneys have indicated they may argue that she lacked the required state of mind to commit premeditated first-degree murder.

But mostly, attorneys on both sides have said little about the case.

The trial could last several weeks. Because of the attention the case has drawn, officials in the town of about 4,500 people, about 80 miles (130 kilometers) east of Memphis, said they were preparing for a horde of reporters and spectators.

"We're just anticipating," McNairy County Circuit Court Clerk Ronnie Brooks said. "We've had some murders in this county, but nothing this sensationalized. It kind of caught us off guard."