Weekend avalanches killed six people in the western states of Montana, Utah and Idaho, with one bruised survivor traveling miles by snowmobile and on foot to reach help, authorities said. 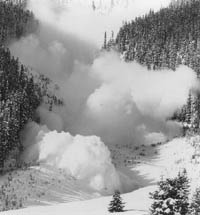 In Montana's Big Belt Mountains, the bodies of two snowmobilers caught in an avalanche were found by searchers early Sunday and removed by helicopter later in the day.

That avalanche happened Saturday at the base of Mount Baldy, about 20 miles (30 kilometers) from Townsend. A survivor traveled the 15 or 20 miles (25 or 30 kilometers) back to the trailhead, initially by snowmobile and then on foot after the machine became stuck, Lewis and Clark County Sheriff Cheryl Leidle said.

Upon reaching a pickup truck at the trailhead, he used a cell phone to call for help, the AP says.

In Utah, two snowmobilers, including a 16 year old, died in separate avalanches on Saturday. On Sunday, a 17-year-old skier was killed after being caught in a slide while skiing out of bounds near the Snowbasin ski resort.

Authorities found the boy's body after several hours of searching. He is the second teenager to die in a Utah avalanche this weekend.

In Idaho, the Bonneville County Sheriff's Office in Idaho Falls confirmed the death of a Utah man in an avalanche near Palisade Peak.