An attempted bank robbery turned into a hostage standoff in a Chicago suburb Wednesday with several people trapped inside, authorities said. 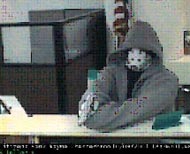 Dolton village spokesman Sean Howard said there was at least one gunman inside the bank, and "at least two to three possible hostages."

Howard said officers had communicated with people inside the Heritage Community Bank, but he declined to give specifics on what was discussed.

Authorities blocked off several streets around the building as police from at least three towns and FBI agents worked to resolve the situation.

Jorge Hernandez, 21, an employee at Pepe's Tacos, a restaurant located near the bank, said two bank employees entered the restaurant around 11 a.m. (1600 GMT) after being instructed to leave the building by their manager.

They described to Hernandez a gunman who had a handkerchief over his face, and they said the gunman was in the bank vault with at least two hostages, Hernandez said.

Hernandez said he and other employees were locked inside the restaurant on the instructions of police, who also told him to stay away from the windows and hang up the phone, reports AP.

The two bank employees had previously been escorted out by police, Hernandez said.

Bennie Wright, 40, said from a nearby Domino's Pizza that he could see police from Dolton and the surrounding towns of South Holland and Riverdale surrounding the bank, some holding weapons. He said the scene was calm as police grouped together near a van.

"They've got it well maintained," Wright said. "It looks like they're mapping out a strategy right now."