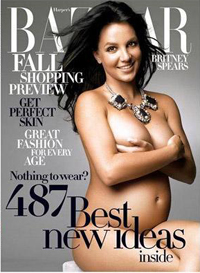 HB Japan, Inc., publisher of the Japanese edition of Harper's Bazaar, plans to rent ad space at the posh Omotesando station next week to promote its October issue with Spears posing naked on the cover.

The ad, in which Spears bares her belly but covers her breasts with her hands, is the same one used in the August issue of the American edition that hit U.S. newsstands last month according to AP.

The publisher reluctantly agreed to blacken out the image from the waist down - covering most of the pop star's belly and thighs - but had planned to write in the black space: "in this place we are not allowed to exercise the same level of freedom of expression as the original Harper's Bazaar."

But on Thursday, Tokyo Metro said it would allow full presentation of the photo as an exception to its obscenity rule, saying it understood the publisher's intention was to portray a happy mother - not to be sexually explicit.

The magazine's deputy chief editor, Kayoko Higashino, welcomed the move. "I'm glad the subway officials understood the meaning of the photo," she said.

Before the reversal, Higashino had called the restriction "ridiculous," and said it would be impossible for viewers to tell that Spears was pregnant, saying she would only look "like a chubby woman."

Spears, pregnant with her second child, darkened her hair and posed naked for photographer Alexi Lubomirski for the Bazaar photos. She is seated with her bare legs pressed together.

In principle, nudity is not accepted in ads in subway cars and stations, said Tokyo Metro spokesman Tatsuya Edakubo.

"Our earlier request to cover the photo from the waist down was because of nudity, not because we had anything against pregnant women," he said, adding that officials later decided that censoring the photo would be inappropriate.

The Omotesando display will include 50 posters for the U.S. fashion magazine, five of them of Spears.