A couple and their adult son have been charged with using their Manhattan business to illegally transfer millions of dollars outside the United States to persons in Eastern Europe, many of whom were involved in identity theft and other cyber crimes. 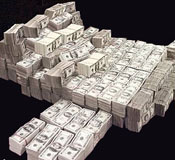 Their 21-year-old son, Alexey Baryshev, who has been charged in the case, is a fugitive believed to be hiding in Europe.

Morgenthau said the family's business on Eighth Avenue in New York City, Western Express International Inc., cashed checks for and made money transfers to persons in Russia, Ukraine and other parts of Eastern Europe despite not being licensed as a money transmitter or check cashing business. Western Express also is facing charges.

Prosecutors believe much of the $25 million (Ђ21 million) that flowed through Western Express' accounts from 2002 to 2005 came from identity theft and other Internet schemes, including $4 million (Ђ3.4 million) from illegally cashed checks.

"This whole thing was a scheme to conceal the true identities of the people who used these transactions," Morgenthau said.

Robert Babayev, a lawyer for Western Express, said it was unclear whether the company and its owners were required to have a license to cash checks and transfer money for clients outside the United States. "We're looking into it," he said, before declining further comment.

Prosecutors have alleged that Western Express acted as a one-stop shop for Eastern Europeans who wanted to conduct business in the United States, but not supply their true identities to their business partners or customers.

According to court documents, Vassilenko, the husband, told prosecutors that he was previously told he didn't need to be licensed because his customers are from overseas.

In addition to cashing checks and transferring money, prosecutors claim Western Express supplied its clients with false, English-sounding identities, phony taxpayer identification numbers and U.S. addresses for those customers to use as mail drops.

According to court documents, Barysheva, the wife, told prosecutors that some of their clients use different names "because American companies discriminate against Russian names."

Most, if not all, of their clients were involved in a variety of cyber crimes, including phishing, spoofing and re-shipping, prosecutors said, reports AP.