An incident with a combat helicopter that fired a missile at spectators has recently occurred during Zapad 2017 military drills. According to 66.ru website, several people were injured as a result of the missile launch. 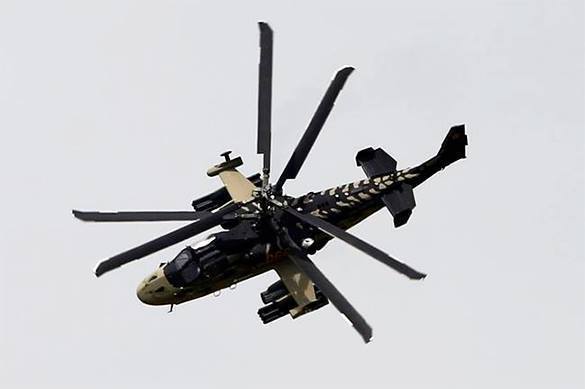 A Ka-52 helicopter inadvertently fired an air-to-surface missile during Zapad-2017 maneuvers at "Luzhsky" training ground in the Leningrad Region. Two people were reportedly injured and hospitalized, 66.ru website said with reference to an "informed source."

It remains unknown, however, when the incident occurred. Yet, a report from the press service of the Western Military District said that on September 17, the crews of the Mi-28N and Ka-52 attack helicopters "worked on the tasks of aerial reconnaissance, conducting a missile attack on ground targets and covering a ground grouping of troops from the air."

According to the source of the above-mentioned publication, the helicopters were flying towards targets, when the missile was launched. Reportedly, the missiles were launched incidentally, as a result of a technical failure on board the helicopter. At least two vehicles were destroyed, whereas two people, most likely journalists, suffered serious injuries, the source said.

The press service of the Western Military District has refuted the information about the incidental missile attack on journalists that allegedly occurred during Zapad 2017 drills.

According to reports in social media, the incident occurred on September 18. However, the press service of the Western Military District said that there were no accidents involving aviation during the maneuvers on September 18.

"All messages in social networks about a missile attack on a crowd of journalists and a multitude of victims come as deliberate provocation or someone's personal stupidity," officials with the department said.

Regarding the video, which was allegedly made on the scene of the supposed attack, officials said that it was made "at another time when helicopters were simulating the destruction of ground targets."

"The aiming system of one of the helicopters mistakenly captured a target, and an unguided missile hit a truck, in which there were no people," the press service explained.