British Foreign Secretary Philip Hammond said that the concert of the Mariinsky Theater orchestra in Syria's Palmyra was a tasteless attempt to distract attention from ongoing air raids in Syria. 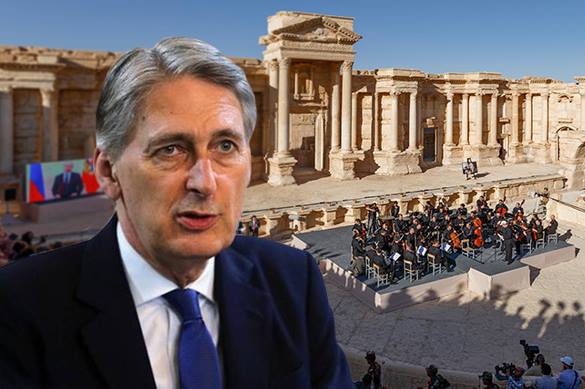 "This attack took place against the backdrop of a concert in Palmyra, a tasteless attempt to distract attention from the continued suffering of millions of Syrians. It shows that there are no depths to which the regime will not sink. It is time for those with influence over Assad to say enough is enough," Hammond said, speaking about the bombing of a refugee camp in the war-torn country, when nearly 30 were killed.

The Symphony Orchestra of the Mariinsky Theatre played amid the ancient ruins of Palmyra under the direction of People's Artist of Russia Valery Gergiev. The concerns was called "Prayer for Palmyra. Music revives ancient walls."

Washington found the concert of the Russian world-famous orchestra in Palmyra a positive event. According to US State Department spokesman Mark Toner, the US praised the musical event in Palmyra, but denounced the fact that Bashar Assad's regime replaced the Islamic State in Palmyra.

Russian President Putin appeared in a video address to the people attending the concert in Palmyra. Strangely enough, Western media paid a lot less attention to the liberation of Palmyra and the mine clearance of the ancient city.