According to U.S. military officials a series of powerful bombs killed eight American soldiers and an interpreter in southern Afghanistan Tuesday morning. The attacks, a day after 14 Americans died in two helicopter crashes, made October the deadliest month for the U.S. military of the eight-year Afghanistan war. 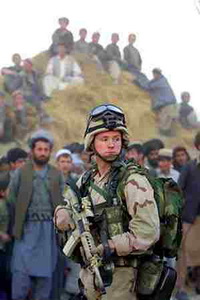 The growing violence -- along with continued political turmoil in Afghanistan -- will likely be a factor in the Obama administration's deliberations over its war strategy.

As the president has weighed different options over the last month, the U.S. military has conducted war games to test the impact of a large or medium-sized influx of new troops. At the same time, public sentiment against the military effort is growing. In September, a senior U.S. foreign service official and former Marine serving in Afghanistan resigned his post, saying he no longer believed the U.S.-led war against insurgents could be successful, The Washington Post reports.

Meanwhile, the deaths make October the deadliest month for American forces in the eight-year war in Afghanistan.

On Monday 11 soldiers were among 14 Americans killed in multiple air crashes. In total this month 55 US troops are said to have died.

Like many deaths in Afghanistan, Tuesday's bloodshed was blamed on the improvised explosive devices (IEDs) that pose the biggest threat to foreign forces operating in the country.

"Additionally, several service members were wounded in these incidents and were transported to a regional medical facility for treatment," said a statement from the International Security Assistance Force (Isaf), BBC News reports.

It was also reported, an ABC/Washington Post poll shows that 63 per cent of Americans believe Mr Obama has no clear plan for Afghanistan.

The action over troops has become - and could end up - the most solemn and important decision of Mr Obama's presidency, with the toll only adding to the political and strategic pressure he faces.

The President was also dealt a blow earlier today when it emerged that the first US official has resigned in protest at the war.

Matthew Hoh, 36, a former captain in the Marine Corps who fought in Iraq before joining the US State Department, quit his post as the senior US civilian in Zabul province, a Taleban stronghold in Afghanistan. He said that he believed the war only fuelled the insurgency, Times Online reports.