A number of tsunamis smashed into the Pacific island nations of American and Western Samoa. They killed possibly more than 100 people, destroying villages and injuring hundreds, officials said on Wednesday. 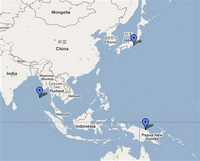 At least 24 people were killed and 50 injured, Governor Togiola Tulafono said from Hawaii, with the southern portion of the main Tutuila island "devastated."

It was also reported, tsunami waves up to 20 feet high, triggered by an earthquake with a magnitude between 8.0 and 8.3, swept ashore on Samoa and neighbouring American Samoa, flattening villages, killing scores of locals and leaving dozens missing.

About 20 minutes after the massive earthquake rocked the Samoan capital of Apia, towering waves hit the southern coast of the Upolo island where many of the holiday resorts are located. The water reached up to a mile inland.

A local who works at the Ili Ili resort on the south coast of Upolo described the horror of watching the water recede before the enormous wave crashed ashore just after dawn.

“We had just finished sweeping and we looked out to sea and there was nothing, no water, there was only coral,” the resort worker told, Times Online reports.

“My kids were preparing to go to school and were all crying and screaming,” he said in the broadcast. “It was a big, big shock to most people, because it is the first time they have experienced such a very strong earthquake,” Bloomberg reports.