Oil prices have risen to new records near $90 a barrel, as the falling dollar drew new foreign investors and speculators to dollar-denominated energy futures. 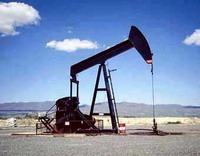 "The main driving factor today is ... the dollar making an all-time low against the euro," said James Cordier, president of Liberty Trading Group in Tampa , Florida .

While oil prices have risen sharply in dollar terms in recent days, the steadily weakening dollar means oil futures are seen as a bargain overseas. Data released in recent weeks shows speculative buying of oil futures is on the rise. Buying by foreign investors sends prices up, which draws more speculators into the market.

Many analysts feel that the underlying fundamentals of supply and demand do not support oil prices of $90 a barrel. On Wednesday, the Energy Department reported that oil and gasoline supplies rose more than expected last week, countering suggestions that supplies are tight.

"Fundamental reasons, we're kind of running out of them," Cordier said.

However, crude supplies at the closely watched Nymex delivery point of Cushing, Oklahoma , fell last week. And several reports in recent days have predicted oil supplies will tighten in the fourth quarter.

On Thursday, light, sweet crude for November delivery rose $2.07 to settle at a record $89.47 a barrel on the New York Mercantile Exchange.

It was the fifth day in a row Nymex crude prices have set new records. Despite the gains, the price of oil is still below inflation-adjusted highs hit in early 1980. Depending on the adjustment, a $38 barrel of oil in 1980 would be worth $96 to $101 or more today.

November natural gas futures fell 8.4 cents to settle at $7.374 per 1,000 cubic feet as investors shrugged off an Energy Department report that inventories rose by 39 billion cubic feet last week, less than analysts had expected. Supplies are high by historic standards.

Some analysts think oil prices are nearing a seasonal peak and will soon begin to fall.

"It's hard to pick a top in a raging bull market, but it's possible that we are close," said Phil Flynn, an analyst at Alaron Trading Group in Chicago in a research note.

And if prices start to fall, they could fall quickly as speculators sell to lock in profits.

"We don't think industry fundamentals support oil prices near $60 (a barrel), let alone $90, but with excessive speculation and lack of government scrutiny, prices could go even higher, before they crash, eventually, in our view," said Fadel Gheit, an analyst at Oppenheimer & Co., in a research note.