About a million Maclaren strollers sold by Target and Babies "R" Us were recalled Monday, after 12 reports of children having their fingertips amputated by a hinge mechanism. 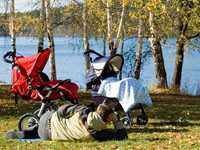 The recall includes all nine models of single and double umbrella Maclaren strollers, according to the Consumer Product Safety Commission, which announced the recall after an investigation.

The amputation risk occurs when a child's finger is placed in the hinge mechanism of a stroller while it is being unfolded. When the opened stroller locks into place, it can cut off the tip of the child's finger.

The recall includes the following stroller models: Volo, Triumph, Quest Sport, Quest Mod, Techno XT, TechnoXLR, Twin Triumph, Twin Techno and Easy Traveller. They have been sold at Babies "R" Us, Target and other stores around the country since 1999. Prices for the strollers ranged from $100 to $360.

The company is offering free hinge covers to prevent future incidents. The covers should not be removed unless the stroller is being cleaned.

"Our message to parents, grandparents and all caregivers is to make sure that you stop using these strollers until you get the repair kit, which zips the covers in place," said CPSC spokeswoman Patty Davis.

The strollers were manufactured in China and distributed by Maclaren USA Inc of South Norwalk, Conn.