Every yellow cab in this city will be a fuel-efficient hybrid by 2012, and stricter emissions and gas mileage standards for taxis will be phased in starting next year, Mayor Michael Bloomberg said Tuesday. 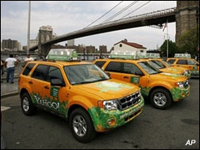 There are now 375 hybrid vehicles among the 13,000 taxis rolling on New York City streets. Under Bloomberg's plan, that number will increase to 1,000 by October 2008 and will grow by about 20 percent each year until 2012.

"There's an awful lot of taxicabs on the streets of New York City," Bloomberg said. "These cars just sit there in traffic sometimes, belching fumes.

"This does a lot less. It's a lot better for all of us," he said of the hybrid plan.

Hybrid vehicles run on a combination of gasoline and electricity, emitting less exhaust and achieving higher gas mileage per gallon. Hybrid models tested include the Toyota Prius, the Toyota Highlander Hybrid, the Lexus RX 400h and the Ford Escape.

Automakers said hybrids are uniquely well-suited to be taxis. Many of them, like the Ford Escape, run solely on battery power while stopped or at low speeds, so they don't cough exhaust while navigating through city traffic. At higher speeds, the gas-powered drive system kicks in and the two work together.

Ford spokesman Jim Cain said the company was not daunted by the announcement that the Crown Victoria would be phased out of the taxi fleet.

"The goals are laudable and it's up to us to work with the city and the taxi agency to make sure we're part of the solution," he said.

Brett Smith, a senior auto industry analyst with the Ann Arbor, Michigan-based Center for Automotive Research, a nonprofit group, said the city's plan provides an opportunity for automakers to grow their hybrid business.

“You might think 13,000 vehicles is a large number, but in automotive production terms it is not a large number at all,'' Smith said.

“It's understood you can't build something in low volume,” Smith said. “But if they can get a built-in market, they can start to build these things and develop other markets as they go forward.”

Evgeny Freidman, whose companies operate 800 licensed cabs, said at the news conference that he is replacing his fleet of Crown Victorias with Ford Escape hybrids, which cost about $3,000 more than a conventional Escape.

Freidman said he comes out ahead because the hybrid taxis, with their lower fuel costs, are more popular with drivers, who pay $10 more a shift on some days to use them, Bloomberg reports.