The Russian Society of Authors (known for the Russian initials as RAO) claims royalties from the company that organized the Moscow show for US singer Beyonce. The association asks for about 2.5 million rubles ($83,000) for the public performance of the singer’s songs without RAO’s permission for it. 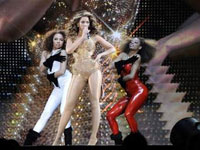 RAO filed the claim at the Office of the Public Prosecutor saying that the concert of singer Beyonce, which took place at Moscow’s Olympic Stadium on November 2, 2009, had violated copyright laws, RIA Novosti reports.

Beyonce is a member of the US analogue of RAO – the American Society of Composers, Authors and Publishers (ASCAP). Like RAO, ASCAP pays its members for public performance of their music. RAO officially represents ASCAP’s interests in the Russian Federation. Therefore, the association collects payments to foreign authors for public performance of their songs in Russia and subsequently wires the payments to ASCAP keeping a commission for the services.

Prosecutors of Moscow’s Central Administrative District upheld the fact of violation of the law in the organization of Beyonce’s concert in Moscow. An investigation proved that the organizing company had not concluded license agreements about the right to perform music in public.

It is worthy of note that Beyonce performed the songs written by herself and other authors.

The Russian Society of Authors filed a similar lawsuit in July of 2009 against Yug-Art – the company that organized Deep Purple’s show in Rostov-on-Don. The company was eventually ordered to pay the compensation of $1,000 for each of the 15 performed songs.