In 2010, 1,290 mines were discovered in the country, according to a preliminary review released on Monday (21), the National Department of Mineral Production (ANP). These numbers are measured from the amount of Final Reports of Research approved by the municipality for 63 substances nationwide. Approval of the report by the DNPM is essential for obtaining a mining concession, a second time 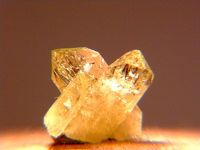 On balance, the discoveries of deposits of metallic minerals such as iron ore are shown as the most representative, reaching 2.5 billion tons. Gold reserves approved in 2010 by DNPM reached about 1.3 billion tons with an average grade of 2.57 grams per tonne. Also found were reserves of manganese, nickel, copper, aluminum, silver, tin, tantalum and tungsten, among others.

Mineral fertilizers such as potash, phosphate and limestone, which are important inputs used in agriculture, together have expanded reserves reaching 3.4 billion tons.

Aggregates used in construction such as sand, clay, granite, crushed stone and gravel, also saw the amount of their reserves expanded. These data, according to the DNPM, endorse the supply of raw materials for infrastructure projects from the federal government under the CAP, such as the construction of dams, roads and drives in the program My Home My Life, by guaranteeing to meet the demand without increasing price.

"These data confirm the large mineral potential of Brazil, that puts the country on the route of national and international investments in search of new deposits, as well as the expansion of mineral production", said the director general of DNPM, Miguel Nery.