On account of an outbreak of bird flu in Canada Ukraine banned imports of Canadian poultry. 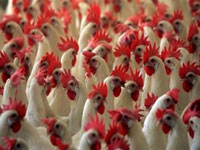 The ban on all poultry and poultry products will be lifted when "the situation is brought under control," Agriculture Ministry official Anatoliy Osadchiy said.

Ukraine currently does not purchase Canadian poultry, but announced the measure as a precaution.

The ex-Soviet republic imported 3,200 tons of poultry from Canada in 2004 and 600 tons in 2005, according to the Economics Ministry. The imports stopped last year.

The Canadian Food Inspection Agency said last month that a bird flu strain that is not harmful to humans had been confirmed at a large chicken farm in the central province of Saskatchewan.

The Saskatchewan strain is not the H5N1 virus that has caused worldwide alarm, but officials say the H7N3 virus is a considerable threat to commercial poultry farms.

The move follows similar bans by the United States, Japan and China.