Three Bangladeshi men convicted of killing a fellow national and raping his wife were beheaded. 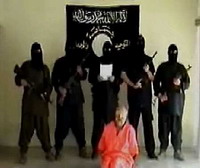 In a statement carried by the official Saudi Press Agency, the ministry said that Thakeer Abdul-Rahman, Tafeel Abdul-Rasheed and Leon Juli stormed the home of the fellow national, whose name was not given.

"They beat him up, threatened him with a knife, blindfolded him and used a rope to strangle him," according to the statement.

It said the three men stole the couple's money and gold jewelry before taking the wife to a remote place and raping her.

The men were executed in the capital Riyadh, the statement added.

Friday's executions brought to 116 the number of people beheaded in the kingdom this year, according to a count by The Associated Press. Saudi Arabia beheaded 38 people last year and 83 people in 2005.