"The children will be dead in a few months," sounded the warning about orphans in Darfur. People were asked to help by paying thousands of euros (dollars) to fly them out of the region's turmoil. 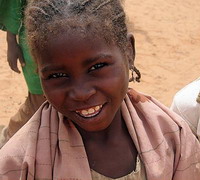 Dozens of French families came forward, offering money for the group and a home for the children. But the French government says the scheme was illegal.

The organizers were arrested Thursday in Africa, leaving a swirl of questions: Were they volunteers for a genuine charity, child traffickers - as authorities in Chad who arrested them claim - or simply misguided people driven by a desire to help?

The group, L'Arche de Zoe (Zoe's Arc), says it is a 3-year-old charity that only wanted to save orphans from Sudan's Darfur region by placing them with French host families. It says it asked host families for 2,400 EUR(US$3,400) to help with logistics and chartering a plane, though some contributed smaller or larger amounts.

"This was about saving children, welcoming them into France, declaring them to authorities and placing them with host families so they could get on with their lives," said Christophe Letien, a spokesman for the group in France.

France's Foreign Ministry denounced the operation, saying children simply could not be swept out of a country without following the right procedures, including strict international regulations to verify they had no living family members.

Starting months ago, "we told (Zoe's Arc) that we had major reservations every time they talked to us," Foreign Ministry spokeswoman Pascale Andreani said. The ministry said it warned prosecutors about the group's operations in July, and that an investigation has been opened.

Zoe's Arc recruited support on its Web site with a message reading: "The survival of these children depends on action. Now! The children will be dead in a few months."

The message expressed frustration with traditional channels of helping Darfur, which has suffered 4½-years of conflict that has left more than 200,000 people dead and 2.5 million displaced.

"We must get out of the mind-set of sterile political speeches, humanitarian excuses and interminable diplomatic negotiations," the site says.

The group was preparing to take 103 children on a flight from Chad, which neighbors Darfur, when authorities there arrested nine French citizens on Thursday. Ahmat Mahamt Bachir, a Chad Cabinet minister, told RTL radio that they were accused of child trafficking. Back in France, dozens of families were waiting at an airport, expecting the children to arrive.

At least one of those arrested, and possibly one or two others, was a journalist covering the event, France's Foreign Ministry said. The spokesman for Zoe's Arc said it heard that Chadian authorities beat those in custody, including nurses and paramedics. He also said Chad was well aware of its operations and that it had letters from Sudan officials documenting that the children were orphans.

Following the arrests, the children have been taken into the care of Chadian authorities with the support of UNICEF, the International Red Cross and the U.N. refugee agency, French officials said.

French diplomats said there were many questions about the children involved - including their nationalities, and even whether all were truly orphans. The foreign ministry spokeswoman said some host families had initially been told they could adopt the children, though neither Sudan nor Chad authorized such adoptions.

Rama Yade, France's junior minister for human rights, told Le Parisien newspaper, "Taking them away like that is, from my point of view, illegal and irresponsible."

Nicolai Panke of the International Committee of the Red Cross said the children were being checked for health problems. Next week, authorities will begin searching for surviving relatives who could take them in.

"With the experience we have in Sudanese refugee camps ... there are rarely orphans who are separated from their whole families," he said.

Meanwhile, France's Foreign Ministry expressed sympathy for families who had expected to welcome children into their homes. Dozens of them slept in tents overnight at an airport in Vatry, east of Paris, where they had waited for the children to arrive Thursday.

Pascale Moreau, a mother of five, said she gave the organization 2,000 EUR(US$2,861) to help with logistics, and that she had planned to take in a child.

"Why did I take action?" she said. "Because (the conflict) in Darfur has been going on for four years, and all the humanitarian groups say the same thing, that nothing is improving there."