A fake dentist dumped a critically ill woman on the curb outside his New York office after she lost consciousness during surgery. 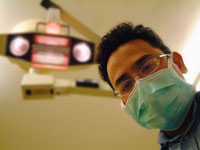 Alexander Poperetchny, 47, pleaded not guilty to reckless endangerment and unauthorized practice at his arraignment Thursday.

The patient, Villimin Colleti, 71, was taken to Coney Island Hospital suffering from heart and brain damage, said the office of Brooklyn District Attorney Charles J. Hynes. She fell unconscious while in the dental chair Tuesday at Poperetchny's office, the statement. It was not immediately clear what caused her to become ill.

Poperetchny's attorney, Arkady Bukh, said his client was a dental technician and did not perform any procedure requiring a dental license. He said the practice did have a licensed dentist on staff.