A teenager accused of scheming an attack on a Philadelphia high school confessed that he illegally amassed weapons. 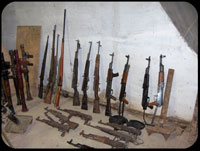 Dillon Cossey, 14, admitted to three crimes criminal solicitation, risking a catastrophe and possession of an instrument of crime in juvenile court.

He had amassed a stockpile of weapons, including a 9 mm semiautomatic rifle, about 30 air-powered guns modeled to look like higher-powered weapons, swords, knives, a bomb-making book, videos of the famous 1999 Columbine high school attack in Colorado and violence-filled notebooks, authorities said.

The boy will be placed in juvenile custody. The longest he can remain there is until his 21st birthday.

"I'm going to make it clear to you and your parents, if you get to the point where you're ready to get home, but they're not worthy of having you, I'll send you somewhere else" such as to a relative or foster home, Tressler told Cossey.

Michele Cossey, 46, is charged with illegally buying her son a .22-caliber handgun, a .22-caliber rifle and a 9 mm semiautomatic rifle with a laser scope.

Cossey took the stand during Friday's hearing and answered yes and no questions.

Cossey admitted to telling a friend that he wanted to stage an attack similar to the 1999 assault on Columbine High School in Colorado, telling him, "The world would be better off without bullies," according to Castor.

Authorities do not believe the teen was close to pulling off an attack; he had no ammunition and the teen he approached was the first he had asked for assistance.