A man passed urine on a dying disabled woman in the street while his friend filmed it on a cellular phone. He was sentenced to three years in prison. 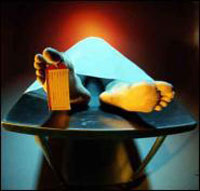 Judge Peter Fox said Anthony Anderson, 27, was guilty of a shocking and prolonged violation of Christine Lakinski, 50, who collapsed in a street in Hartlepool, northeast England, in July.

Lakinski, who had physical and learning disabilities, fell and hit her head while walking home. A post mortem determined she died of pancreatic failure.

Prosecutors said Anderson, who was celebrating his birthday with friends, kicked Lakinski on the foot, poured a bowl of water over her, then urinated on her as a friend filmed the assault on a mobile phone. He also sprayed her with shaving foam, in an attack that lasted half an hour.

Prosecution lawyer Sue Jacobs said one of the group shouted "This is YouTube material" during the attack.

The group left Lakinski motionless on the sidewalk, calling an ambulance about 20 minutes later after they had got ready to go to a nightclub. Paramedics arrived around an hour after Lakinski collapsed and found no sign of life.

The judge called the episode "a shockingly sad story."

"You violated this woman in an incredible way and the shocking nature of your acts over a prolonged period of time must mean that a prison sentence of greater length is appropriate in this case," the judge said, passing sentence at Teesside Crown Court.