Macy's Inc. will have a larger selection of Tommy Hilfiger men's and women's sportswear in all its stores starting next fall, Macy's said Friday.  The number of Hilfiger shops will be enlarged in high-volume stores, the companies announced. 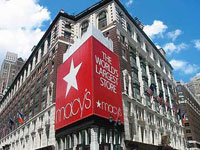 "Tommy Hilfiger already is one of the most successful vendor resources at Macy's and a brand that our customers expect to find in our stores," said Terry J. Lundgren, Macy's chairman, president and chief executive officer.

He said the deal "will bring our customers an increasing level of compelling and distinctive fashions that are consistent with their aspirations and lifestyles."

Tommy Hilfiger Group will continue to operate its own freestanding stores and sell its products on tommy.com.

Fred Gehring, chief executive officer of Tommy Hilfiger Group, said the deal will enable its team to focus on one nationwide account. At the same time, he said the apparel company would expand its freestanding Tommy Hilfiger stores in key locations across the country.

Macy's Inc., with corporate offices in Cincinnati and New York, operates more than 850 department stores in 45 states, the District of Columbia, Guam and Puerto Rico under the names of Macy's and Bloomingdale's. The company also operates macys.com, bloomingdales.com and Bloomingdale's By Mail.