Russian President Vladimir Putin on Friday tried to convince European leaders that Russian investment had an exclusively practical character and praised forwarding trade ties between the 27-nation bloc and its neighbor to the East. 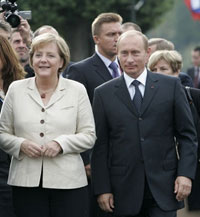 Putin spoke at the opening of the twice-yearly summit that is expected to yield little progress on long-standing disputes.

Talks focused on a range of obstacles standing in the way of a planned strategic partnership agreement that seeks to deepen ties between Moscow and Brussels. Relations have turned frosty in recent years, however, due to quarrels over trade, energy, human rights, Balkan conflicts and other issues.

Just two minor deals were expected to be announced after the two hours of talks. One aims to increase cooperation in the fight against drug use and trafficking, and the other is to let Russia raise steel exports to Western Europe.

Socrates said at the start of the talks he wanted them to be "constructive and positive."

"Politicians have to be able to respond to the uncertainties and tensions of the modern world. Nothing will contribute more to world peace than a good, stable and lasting relationship between the EU and Russia," he said.

Topping the list of concerns for a growing number of European nations is Russian energy policy the reliability of supplies and the intentions of state-run oil and gas companies. Russia already provides 30 percent of EU energy imports, including 44 percent of natural gas imports, and state-controlled gas giant OAO Gazprom has recently moved to acquire assets in Europe and strike bilateral deals with some EU countries.

That has led the EU to consider new restrictions on non-EU companies owning majority stakes in gas pipelines or electricity power grids without additional agreements much to the Russians' consternation.

Putin tried to assuage those worries, saying that Russian investment is private money, not government, and should be welcomed by the EU.

"When we hear in some countries phrases like 'the Russians are coming with their scary money,' it sounds a bit funny," he said.

He said money flowing into Russian government coffers largely from oil and gas exports was being used to resolve internal domestic problems. And he noted that private foreign investors hold large amounts of shares in Gazprom.

"Our investments abroad have a strictly, exclusively practical character," he said.

Russian officials have said they are optimistic about the resolving one issue that has kept Moscow and Brussels from signing a new cooperation agreement meat imports from Poland.

A two-year Russian ban on Polish meat imports has led Warsaw to veto a new agreement with Russia. But the outcome of last weekend's elections in which a pro-business, pro-European bloc defeated the Prime Minister Jaroslaw Kaczynski could ease the situation.

Still, Putin said the current cooperation agreement would be prolonged.

Even so, there are major hurdles to broader deal between the two sides, including key trade and foreign policy issues.

Putin arrived in the Portuguese capital Lisbon on Thursday and in his first news conference appeared to criticize new U.S. sanctions against Iran.

The Russian leader also warned against supporting Kosovo's independence, another difficult issue between Russia and the West. Moscow opposes a Western-backed plan to grant the province internationally supervised independence from Serbia.

"I consider that the good-neighbor atmosphere that has been created here by our hosts and that now characterizes our bilateral relations will be translated to the EU-Russia summit ... and will contribute to the achievement of a positive result," Putin said.