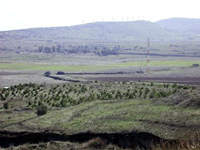 The felling of cherry trees in Majdal Shams village was "a flagrant violation of international law and humanitarian law," said Syrian officials quoted by the report. It did not say when the incident happened.

The SANA article said the cutting of trees aimed to put pressure on Syrian villagers in order to force them to leave their land and it called the United Nations to pressure Israel to stop "these illegitimate and inhuman practices."

Israel has been occupying the strategic Golan Heights since the 1967 Mideast war and Syria been demanding a full Israeli withdrawal from the plateau.

Peace talks between Israel and Syria have been stalled since 2000, and last week Israeli Prime Minister Ehud Olmert was reported to be considering renewed contacts.

Israeli defense officials said the army has decided to move an upcoming military exercise off the disputed Golan Heights to avoid further heightening tensions with Syria.

The situation between the two neighbors has been tense since Israeli warplanes on Sept. 6 struck a target in Syria, which Western news media have described as some sort of nuclear facility linked to North Korea.

Syria strongly denied the target was a nuclear facility saying that only an unused military building was hit.